Well, after some serious mishaps, I’ve finally made a solid start on the Jane hat. What were the mishaps?  First, my shortest cable for my circular needles was too long.  Second, I found out they don’t make a shorter one for the needles I had, so I would have to buy all new needles with a permanently-attached cable.  Third, I accidentally (in a hurry) purchased two huge balls of yarn that ended up being way way too chunky for the project/needles. While I suspected this was the case as soon as I started knitting, I really wanted to use the yarn (it was such a pretty blue/purple colour that my friend Nathan kept saying made my eyes pop)… which leads me to my fourth mishap: I knitted the entire brim of the hat with it before fully acknowledging how stiff/hot it would be to wear (and that I would loathe knitting the entire thing since it was hurting my fingers so much already) before deciding to rip it out and start with new yarn.  Fifth, I carefully cast on all 85 stitches in a much lighter-weight yarn (navy blue, decidedly less exciting), then proceeded to lose a couple stitches while joining the project in the round, and then it was so irretrievably screwed up that I had to start all over again.  Nightmare!

But this third time seems to have been the proverbial charm.  I got it going properly!  And I am so happy I changed my wool.  My knitting experience went from the slow-and-painful category to the quick-and-smooth category right away.  And isn’t that the point of knitting, mostly?  To enjoy it?

Maybe it’s just synthetic happiness, but I am liking the navy blue more and more…

I knit this much up last night. It was actually pretty quick to get this far.  It’s about three inches long so far?  Another 1.5″ and the brim will be done (it gets folded under). 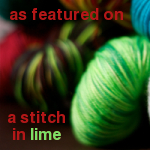 Attention featured crafters! Feel free to copy and paste the following HTML text to your own blog and spread the love!